Reflections on the Man-boy at 15

This post has been sitting in my drafts for months, since the Man-boy actually turned 15 last June. All the ideas were there from the start, but for some reason, I couldn’t get the words out right. I’m still not sure I have, but I figured it was time to post it before he turns 16. I guess that’s the complication of mothering a Man-boy. You’re never really certain if the words are coming out right.

Our eldest son just turned 15. He is in a unique position in our family: technically a middle child, but also the oldest of our three boys.

As the mother of one girl and three boys,  I have observed first-hand a truth that somehow offends our post post-modern sensibilities: boys are different than girls. Generalizations are always dangerous, I know, because they’re so general. But I hope we can agree that a generalization is not a specification, and I hope that you will allow me this one.

As man-boys go, this one has a lot of energy. A LOT. He needs to be constantly active, but, thankfully, not in the way that gets him into trouble at school. The engagement and tasks there are enough to keep him busy, but when he comes home, he has to choose what he will do. And this is where he struggles. Having to choose can mean choosing nothing, which is never a good choice, especially for a 15-year-old man-boy. We have remedied this in several ways: involvement in after-school activities, helpfulness tasks at home, and odd jobs for our neighbors.

This remedy is perfect for the man-boy because he is task-oriented, hard-working, and high-achieving. His work must be meaningful to be appealing to him. While we are still working on defining cleaning up after himself as meaningful work, he has already learned the value of minimalism. He likes to be organized, and he understands that this is much more easily accomplished if he has less stuff.

Man-boy is an observant learner – a watch-and-do kind of kid. He has always been this way. When he was Little-boy, it was more obvious. I loved to watch him watching, because I could see how hard he was thinking about the process of what he saw. He watched his daddy fixing things, and he watched his mama cooking and cleaning. He had a toolset, a working vacuum, and a working leaf blower by his fourth birthday.

Little-boy also watched children playing. He was trying to figure out their games. When he comfortably understood what was going on, he decided if he would participate or not. I did not push him. What would be the point? His preschool teacher told me about halfway through the school year that he had just finally started participating in gym. I wasn’t surprised. Or worried. That’s just who he is. He has to understand first. Then do.

Despite this lack of gym participation in his preschool, he has grown into an athletic young man who has no problem participating in gym, soccer, karate, or any of the other physical activities he undertakes. He even completed a Warrior Challenge with his sister, dad, and aunt. Standing on the sidelines for four and a half months when he was five years old did not scar him. It gave him room to breathe. And to become.

Little-boy attended preschool when he was five, because he wasn’t ready for kindergarten. Not because he didn’t know things, he did. He passed the kindergarten readiness test with flying colors. But he didn’t pass the “away from Mommy” readiness test. On test day, I had to pry his white-knuckled, clutching fingers from my pants and hand my screaming, writhing boy to the pretty, young kindergarten teacher. God bless her. She gathered him up in her arms and took him into “the room” to be tested. He stopped screaming 35 seconds after she put him down, and aced the “what I know” stuff.

I was relieved that he was deemed “ready” by the school, but visions of prying that screaming boy off my legs one hundred and eighty-five times that year gave me pause. He wasn’t ready, really, because he needed to be with me. So we started with preschool, just three mornings a week. Then, because we moved when he was six, he didn’t have to go to school all day that year either.

So, I homeschooled him for kindergarten. The first part of the school year, he was taught at Grammie and Pop’s, because we were living at their house between house #1 and house #2. That was a chaotic time, but we got to prolong the blessings of the early years when siblings are first best friends, and the days are wide open to stories, play, and home. Because he was homeschooled, I had the privilege of teaching him how to read. He has no memory of this watch-and-do experience, because it was so fluid with what we did in our home anyway. I read books to him, as I always had, snuggled up on the couch, and he read too. Eventually, he read more words than I did, and then, one day, he just read. All by himself.

As parents, we teach our children all kinds of things every day, particularly when they are small. All of these lessons are important, but there is something profoundly magical about teaching a child to read. Suddenly, he didn’t need me for that anymore. And so it went like that with many things: doing things all by himself, and not needing me anymore.

Ultimately, the decision to delay kindergarten that we had long ago wrestled and prayed over was a gift to him and to us: the gift of time. Little-boy had time to grow and become at his own pace, and while being the oldest in his class was sometimes difficult in the middle school years, Man-boy is not just surviving high school; he is thriving.

Because really, what is the big rush anyway?

We rush our children through childhood, dutifully “preparing” them for the grown-up world, piling on expectations and complications that their little shoulders were never meant to carry. We’re so busy getting them ready for adulthood that we forget to let them be children.

And then we cry when they’re gone.

Seriously, we are ridiculous.

Just yesterday Man-boy was a baby, a toddler, a preschooler, and a scrappy little boy that smelled of sweat and mud and sunshine in that little-boy-musk way. Then one day, he lost that little-boy musk. I didn’t know that it had happened, until it was suddenly replaced by an other-worldly man-boy stench that is hard for even a mother to love. When he hugs me after soccer practice, and makes sure I get a full, olfactory-offending inhalation, I must admit, I miss that little boy smell, because it really is gone.

Someday, Man-boy will be a man. I’m sure, though, that like his dad, he’ll never completely lose the boy part of himself. I hope he doesn’t. I hope he never loses his energy, or his love for his family, or his love for his Savior. And someday, I pray that my Man-boy meets a lovely young lady that balances his energy, loves her family and his too, and most of all, loves his Savior as her own. When he finds her, we’ll all know it, because my hugger will finally pucker up. And that’s how we’ll know she’s the one.

Until then, we’ll watch and pray. 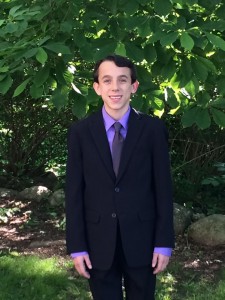 Welcome! I'm so glad you stopped by. My name is Julia. I am a wife, a mother, a daughter, a sister, a friend, a teacher, and most recently, a writer. Above all, I am a daughter of the King. I am constantly amazed at God's goodness in my life; undeserved and unlimited. Come sit and visit awhile. The teapot's always on the stove.
View all posts by Julia →
This entry was posted in Mama Life, Uncategorized. Bookmark the permalink.